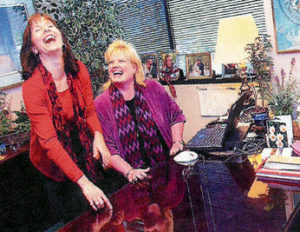 No one at Marianne Barkman’s real estate office in Bellevue looks at her funny when she tells them she’s been feng shui’ed. Many of her colleagues’ work spaces have been touched by the ancient Chinese philosophy of placement. About a third of their clients ask about it when house hunting. Barkman herself will tell you she was promoted to a senior vice president position at John L. Scott Real Estate just two weeks after her office got the feng shui once-over.

Some might say the connection is tenuous, but whether it’s the resume-worthy results, increased efficiency or just plain prettier office, the concept of a “positive work space” is hitting the mainstream and catching the attention of corporate leaders.

Not long ago, feng shui was considered a bit of a New Age fad. Now it’s not only winning over skeptics, it’s spawned an industry that finds a niche in such fields as interior design, real estate, urban planning, architecture and landscaping.

“It’s growing,” said Anne Mansfield, Western regional director of the International Feng Shui Guild. “It’s in the beginning stages of becoming a profession that is legitimized by the results people are getting.” The guild, the closest thing to a feng shui organization, has chapters in half the states, but there are no figures on the number of practitioners nationwide.

And though ethereal terms such as “balance,” “diffusing negativity” and “harmony” are bandied about the industry like so much good karma, enthusiasts say feng shui can often affect businesses in ways that improve the bottom line.

No one can say whether feng shui alone has increased business by a certain percentage; there are no formal studies on its effect. Rather, supporters say the office just feels like a better place and that anecdotal evidence is enough to keep the industry thriving. A harmonious workplace equals happy workers, who are more productive, Mansfield said.

“The office is just zipping now,” she said. “People are talking to each other, business is hopping, and it’s just fun to watch. They don’t know why it works, but it just does.”

After Barkman was promoted, she set about feng shui-ing the entire John L. Scott corporate office, from the lobby to the chief executive’s office. “The office is just zipping now,” she said. “People are talking to each other, business is hopping, and it’s just fun to watch. They don’t know why it works, but it just does.”

Orest Taraban, first vice president of Prudential Securities in Seattle, was a bit wary of the concept when he first heard of it. But after he noticed a difference in the feng shui’ed offices of a few of his co-workers, he decided to give it a try. “I couldn’t believe the difference that just seemingly moving some furniture had on the feeling in that person’s office,” he said. “I thought ‘There must be something to this.'”

That was a year ago, and Taraban said he’s a much more orderly person post-feng shui. The new feel of his office has inspired him to finish projects that previously would have cluttered his desk for months. It also has given him a new sense of focus to lend to his work.

With the rise in feng shui’s popularity, a host of practitioners have surfaced to pass on their expertise to homes and offices. The mind behind Barkman’s and Taraban’s workplace transformation, Cynthia Chomos, is one such practitioner. The majority of her Seattle-based business is in home consultations, but she’s seen a growing market for office feng shui.

“The workplace is especially important because that’s where we spend a lot of our time,” she said. “If you want employees to function at their optimum best, people need an environment that supports them.”

When Chomos is hired, she does a walkthrough of the space to see which parts are “out of balance,” whether it’s due to poor lighting, furniture placement or the lack of that essential “something.” That could be a fountain, a potted plant or a mirror.

Next, it’s time for the actual changes. For example, a worker’s desk should never be in the direct path of a doorway, his or her back should never face the entrance and he or she should be located at the heart of the room.

The concept can be remarkably simple: sharp corners, bad; soft outlines, good. As Chomos puts it, “Nothing in nature is straight.”

Practitioner fees vary depending on the size of the space in question, and can be affected by the practitioner’s reputation. Hourly prices range from $50 to $100 but can reach as high as $300, Mansfield said. These prices generally fall in line with the hourly fee of interior designers. It usually takes a minimum of two hours to feng shui a space, but that can last much longer if, for example, the venue is an entire building.

For practitioners assessing space, there are many theories that guide them. Some work more intuitively, using their senses to gauge the rearrangements the more Americanized route. Others adamantly stick to tradition and use an octagonal chart, or bagua, that outlines the different energy focal points in a room. All practitioners use the bagua in some form, Mansfield said, but to what extent varies greatly. Barkman keeps a bagua in her desk, a fountain in the corner and a new comfort in her surroundings she says she owes to feng shui. “As hectic as we are, we do whatever works out” for a sense of calm in our lives, she said. “I mean, why not?”